Sometimes, even when you don’t know a lot about something, you can figure out quite a bit just on first glance. Plenty of people could not tell you what engine resides beneath the hood of a LaFerrari or Lamborghini Huracan Performante Spyder, but with one look at either of those two Italian masterpieces — just the curves, the angles, the sound, the posture and overwhelming exotic essence emanating from every carbon fiber stitch is enough to make any average passerby take one look at these cars and realize they are something special. Or when a child begins listening to music in the car with their parents, they don’t know the history of rock and roll, they aren’t privy to all the ins and outs of the music industry or even the difference between a bass guitar and snare drum. But, when Imagine by John Lennon comes on the radio, or Stairway to Heaven by Led Zeppelin, or even the first few bars of Smells Like Teen Spirit by Nirvana, that child doesn’t need to know anything. All they know in that moment, is that feeling that something magical is happening.

This idea stems not just from music to cars, but to other modes of transportation as well. And that is because taking people from one place to another is not just about being pragmatic and practical, the vessels we chose to use have become works of art in and of themselves. Cars are the easiest examples of this, but boats come in a close second, and it doesn’t take a Navel Officer to appreciate the beauty and luxury of some models. One of those exceptional models is the Sea Ray Sundancer 400. You don’t need to know much about anything to realize that this boat is something special.

The Sundancer 400 is a forty foot beauty has a beam of 13’6”, a draft of 40” a dead rise of 17 degrees and a dry weight of 31,391 pounds. It can sleep anywhere from 5-7 people and is powered by a very capable T-VD-Cummins QSB 480 6.7 HO motor putting out a serious 480-horsepower. This showstopper has an open concept design that allows light into just about every space on board. There is a natural flow from one area thanks to the single level main deck. Out on the stern, once boarded from the swim platform, which extends a full 5’ 10” out from the transom, there is a large area for all kinds of entertaining, highlighted by plush L-shaped seating surrounding a pedestal table that is far more sturdy than some lesser boats have that feel like they are made by Fisher-Price. For an additional eight grand you can also add in an outdoor galley to be able to grill under the stars if that’s your thing. A large hatch covers things up in case of inclement weather, but when the sun is out, the Sundancer’s outdoor grill makes tailgating look like joke. Beyond just cooking, under the seats hide two carry-on coolers in plain sight which can be slid out with no need for the cushions to be removed for access. 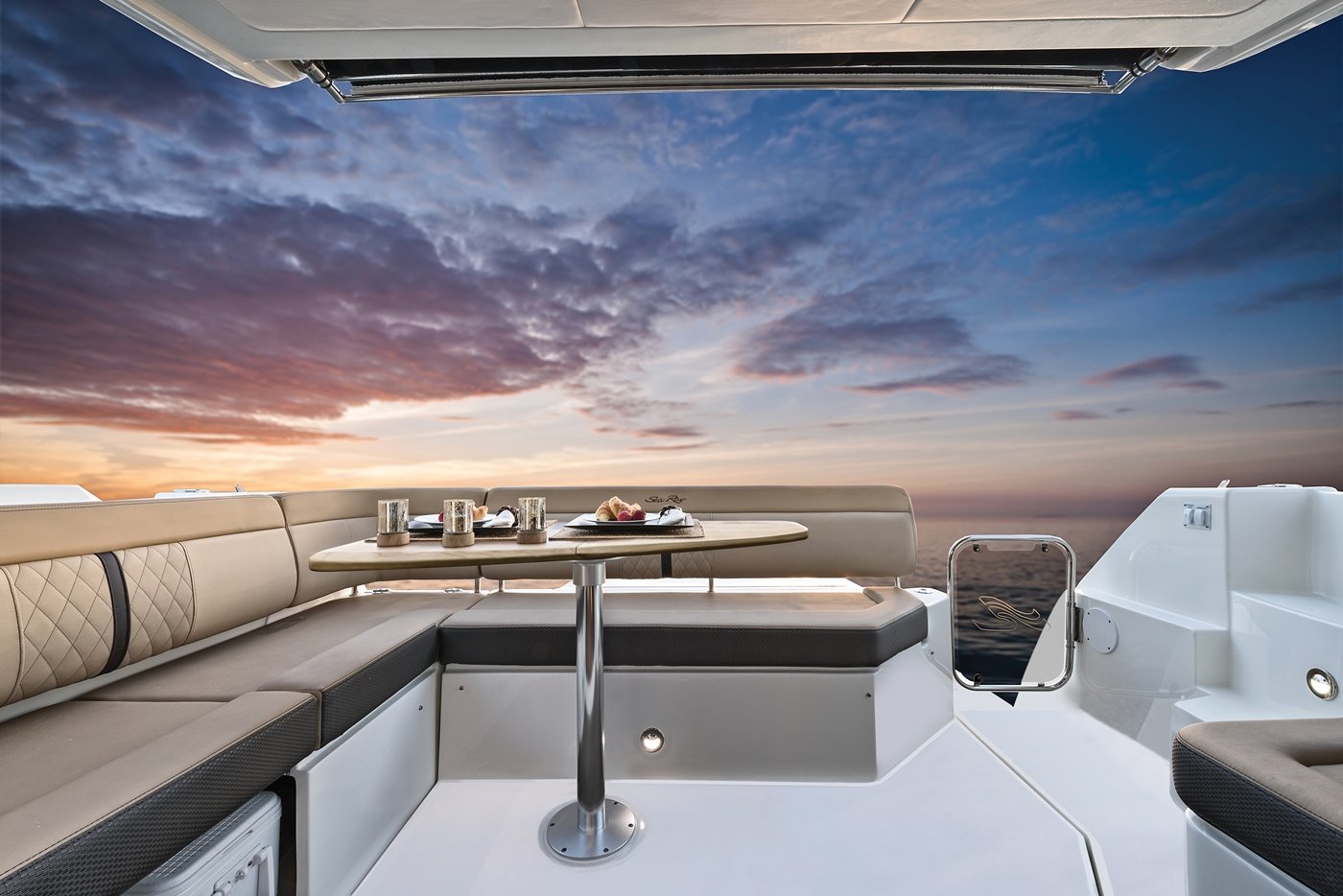 Up on the bow, there is a multi-position sun pad that allows passengers to bask in the lap of luxury while being reigned in by stainless steel safety rails and even an optional $1,300 audio system, mounted to those rails, if so desired. Moving inside, you’ll notice the large sunroof and windows allow tons of light and breeze to comb through the cockpit, and what you may not notice is the 27,000 BTW HVAC system ready and waiting to heat or cool the main deck at a moments notice. There are also tons of other options that the Sundancer 400 offers up that may go relatively unnoticed as well. Things like a Blu-ray player, gaming system, surround sound stereo system, hardwood floors, a pull-out bed, a wine chiller, Chestnut wood cabinetry, a central vacuum, copious amounts of pillows and Allante Fabric, flatscreen TV, a hideaway safe, and even a second head are all on the checklist of options. Below deck, the amount of closet space alone in the master would impress anyone not named Kardashian. The finest fit and finish materials are all plentifully abound. The level of excellence Sea Ray put into the Sundancer 400 is evident in every detail. 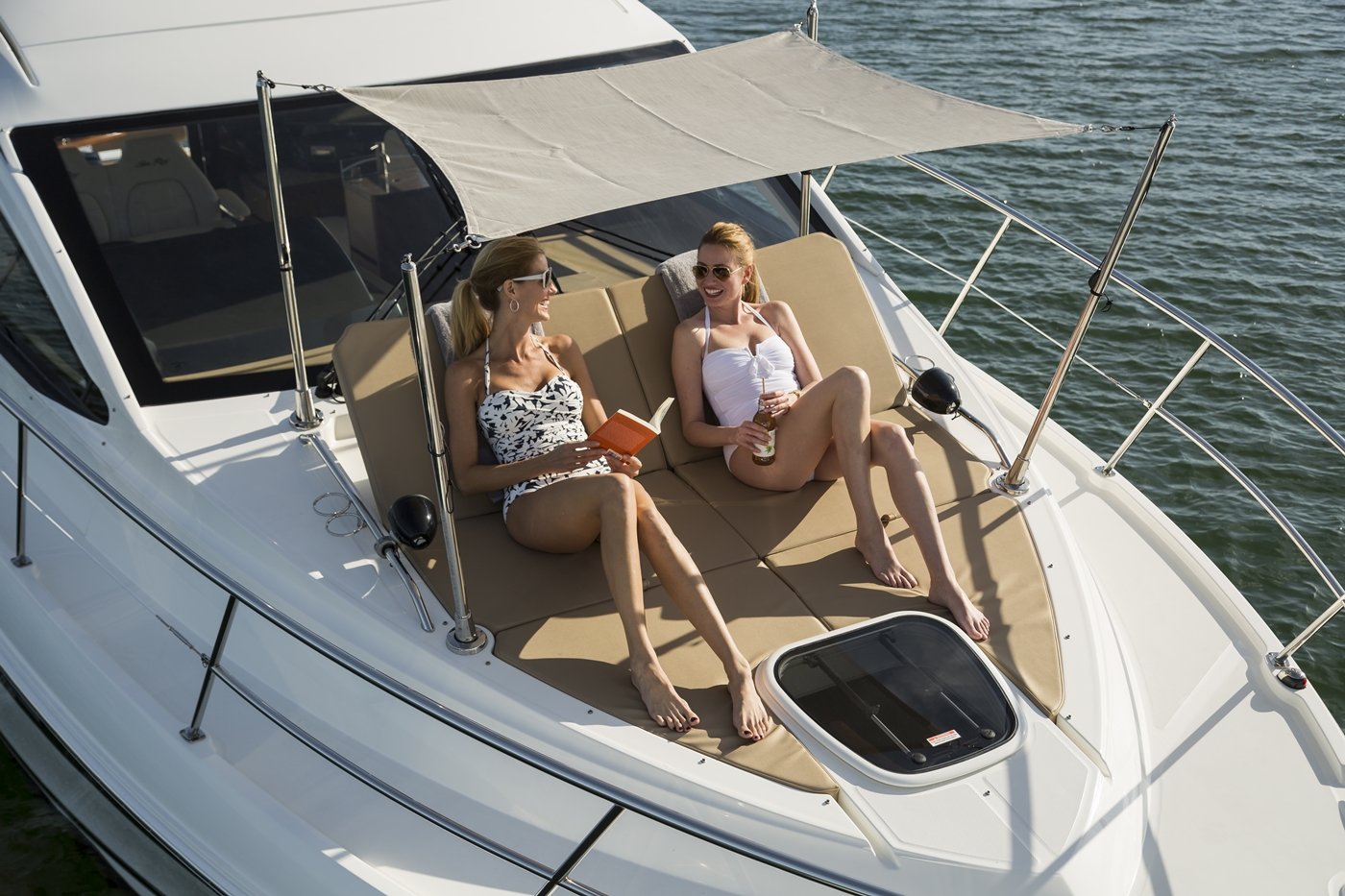 Out on the water, the 400 handles as it should — maturely and predictably. There is a solid and capable feel that does not surprise and provides constant confidence-inducing feedback. Top speed depending on conditions is right around 37 mph, while the best cruise is just about 29 mph, which provides a very frugal 0.8 miles per gallon and a cruising range of just under 240 miles thanks to the massive 344 gallon fuel capacity below deck.

Sure, the Sundancer 400 isn’t cheap, in fact, it cost more than most Lamborghinis. But, what is the price of owning something that is truly special? Vehicles are more than transportation, they are art. And the value of art, is in the eye of the beholder. These special creations are worth whatever someone is willing to pay for them. But in some cases, an argument could be made that although things like the Sundancer 400 are expensive, owning a moving masterpiece is actually priceless.