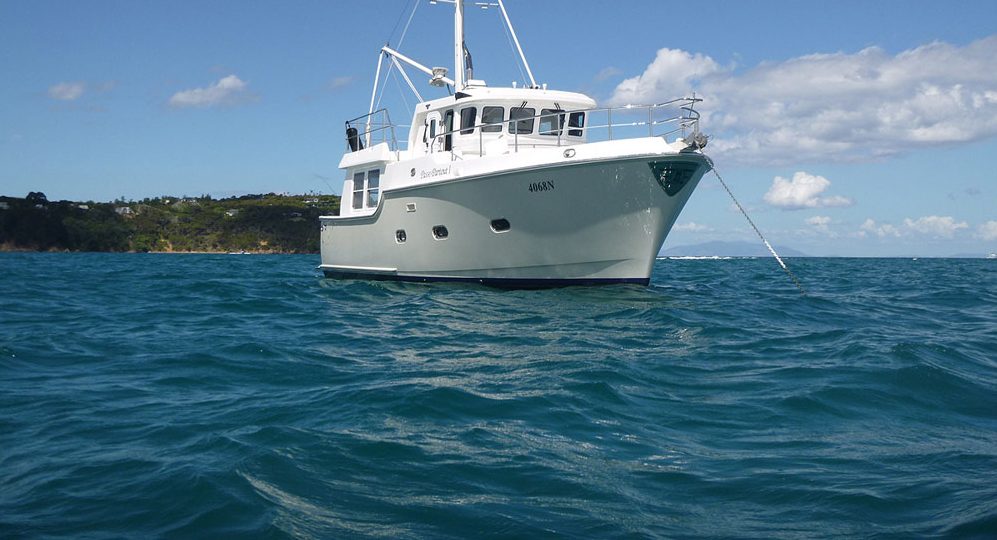 At one point or another, everyone has come up with a short list of items that truly belong on their bucket list. Some want to climb Mount Everest, some people want to swim with dolphins, while others want to make out with Jennifer Aniston or maybe sail around the world. Suffice it to say that some of these are a bit more attainable than others … we don’t think Ms. Aniston is currently looking to donate to anyone’s personal self-actualization charity, so that one might be out. But, the good news is that the ability to cruise around the world may not be quite as unattainable as previously thought.

Long range cruising boats are typically, ridiculously expensive, and thus, make those life-highlight moments only truly tangible for the idle rich. It’s a sad state of affairs by and large, but if you look hard enough, sometimes you can find a boat that is the exception to the rule, even if it happens to be out of production. Sometimes, you can buck the system and live your dreams. Enter: the Nordhavn 40.

The Nordhavn 40 was a legit cruising vessel of the highest caliber. No, it wasn’t a 100-ft yacht, but, in a way, that’s the point. Technically speaking, the 40 was Nordhavn’s smallest example of a sea going vessel, and that was very much by design. The company wanted to prove that even a “small” boat could still be built well enough to circumnavigate the world. And honestly, with a length overall of 39’9”, a beam of 14’6”, and a draft of 5’2”, the Nordhavn 40 was not really that small by anyone’s standards, especially when it displaced a no-so-svelte 50,000 pounds. But that heft added a feeling of reassuring confidence to anyone lucky enough to pilot the 40.

Up from the pilothouse, the captain had glare-reducing reverse-angle windows and there was also a folding chart table as well as a large fold-out couch, as well as room for a myriad of customizable options for things like navigation and sound systems. Below deck there was a very warm and inviting cabin, that could have also be fine-tuned to each buyer’s individual needs and wants. For most, there was at least a U-shaped couch with a dining table perfect for family dinners, as well as a full kitchen with a sink, microwave, and center island that housed plenty of storage for all kinds of necessities. There was a lavish owner’s stateroom up front with queen-sized bed space. There was also guest stateroom, washer/dryer and engine room access down there as well. Specific colors and materials were tricked out to personalized tastes. There was also freedom to add a multitude of other gadgets and amenities, and plenty of space to do so.

The Nordhavn 40 was powered by a John Deere 107-horsepower 4045 that had a dry exhaust system and if driven at a speed of seven knots could had a range up to 2,400 nautical miles. Not bad for someone who was trying to make a trek across the pond. Nordhavn also thought things through a bit for those that wanted to adventure out into the wild blue yonder, and added a wing engine to the 40. This little motor served as an independent backup engine should something have failed with the main John Deere. The wing engine could power the 40 to the tune of 4.5 knots and has its own shaft and fuel supply.

Nordhavn must have had some kind of notion that it had the capacity to make people’s dreams come true when it built the 40 because shortly after its creation, Nordhavn decided to put their craftsmanship and theories to the test. The sent the 40 out on a 23,000 nautical mile journey … you guessed it …. around the world! The trip took a grand total of twenty-six weeks to complete, and served as a trial-by-fire proving ground to help the company relentlessly tweak and modify the 40 with info gathered from that global voyage. So, thanks to Nordhavn and specifically the 40, there is one more substantially, more affordable way to check one of those pesky items off your bucket list. Yes, it is out of production, but there might be some very nice used examples for sale from those that have finally achieved their dreams and are ready to move on. Now, if Nordhavn could only find a way to clone Jennifer Aniston …