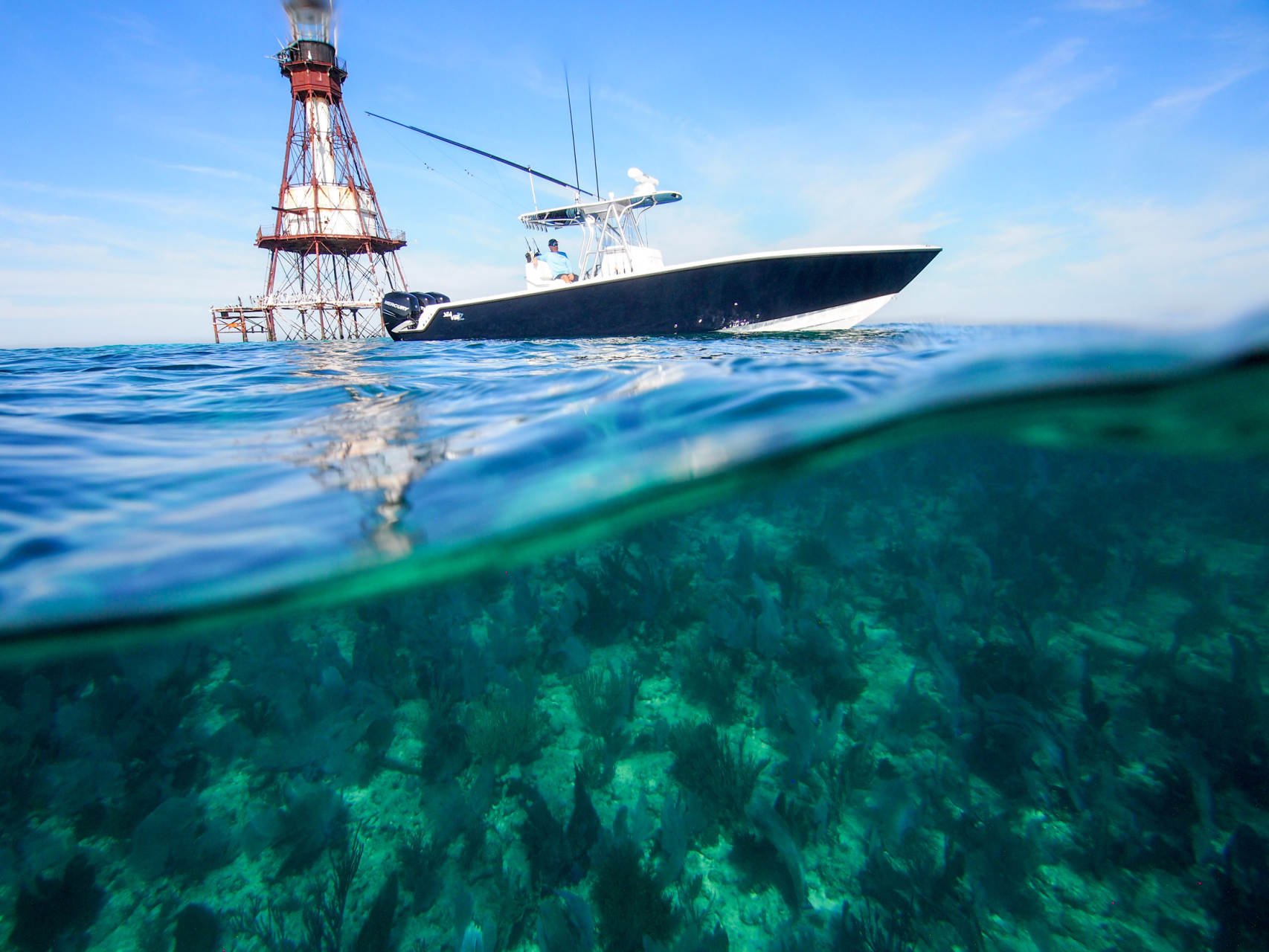 Sure, fishing is fun just about anywhere at anytime. Whether you’re basking under the sun of a small lake in a row boat, or wading through a stream casting out flies, thigh-high is water that is just a little too cold. Or speaking of cold, fishing can even be fun when you’re sitting in an outhouse sized wooden shack on top of a frozen lake with a few friends drinking more beers than catching fish. Anywhere you are, fishing can be a blast. But if we’re being honest with ourselves, the best fishing is when you’re out on the open water, cruising to a remote spot known only to a few, gear and rods in tow and the sun shining over head. Furthermore, while no on says you absolutely need a boat to have fun fishing, again, the truth is, the better the boat, the more likely to have fun you are, fish or not.

That ideology brings us to none other than the new Seabee 340Z. This center console vessel has a length overall of 34’ 9”, a 10’ beam and a dry weight of 7,950 pounds while sporting a two step hull. It is a large fishing boat that was born ready for adventure and fun.

The first thing you may notice about the 340Z is the triple engine setup — specifically to the tune of three Evinrude E-TEC G2 that make a whopping 300-horsepower each. That may seem a little overkill in terms of fishing boats, but that’s just fine by us. The G2 motors are direct injection two stroke motors, which was done purposefully instead of more traditional four stroke variants because it provides more low and mid range torque, which for most fishermen will provide much more useful and practical than what would ultimately ending up being just theoretical top speed power. The direct injection is complimented by a trick engine management module in each motor, which helps optimize fuel efficiency, as well as making the G2 the most environmentally friendly motor out there. This triple threat engine setup also has the ability to tilt a full 82 degrees out of the water when needed.

But just because it’s efficient doesn’t mean the 340Z isn’t a monster out on the open water. At 5,800 RPM the SeaVee can light up the speedometer to the tune of 58 mph. Time to plane takes only 4.8 seconds, while 0-20 mph takes 5.9 seconds and 0-30 mph takes 8.9 seconds. The most effieinct cruise is found at 4,000 rpm and 35.8 mph which nets a 1.2 mpg fuel economy return. Switch over to trolling speed and you will suddenly find a whole other level of efficiency. At 1,500 rpm you can cruise at about 9.0 mph and get a 1.5 mpg return. Drop that speed down to 600 rpm and 3.5 mph and you’ll see a ridiculous 4.3 mpg return. This kind of return simply crushes everything else in its class. The two stepped hull help this big boat maintain that fuel efficiency, get up to planing speed quicker as well as flat out go faster, as evidenced by that crazy top end speed.

Inside the boat, the bow serves up plenty of space and room for fishing gear. The center mount and optional casket box measures 3’ 9” and can be used for a myriad of purposes. The foredeck has two massive 45 gallon fish boxes and one center 53 gallon fish box that can also be used as a live well. Forward from that is another massive 180 gallon fish box that actually has a two piece hatched lid which can be opened electronically. Both walkways have eight vertical rod holders ready to be used. The cockpit itself is surrounded on three sides by a sturdy windshield as well as a LED-lit fiberglass top. The two 16” SIMRAD displays provide all the pertinent info needed while a 7” touch screen allows engine control at the touch of a finger. The console seat back sports a fun array of alternating rod and beverage holders, while also housing yet more storage area and a fold down bait prep area.

All in all the SeaVee 340Z is a wonderfully appointed and incredibly competent fishing boat that has the features and just slightly more power than you might need for your next fishing trip. But then, while fishing is always fun, sometimes the right boat can make your next trip, your best trip.